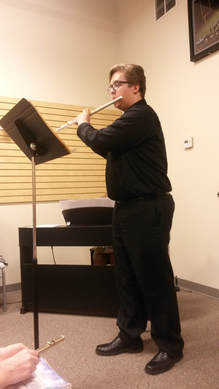 ​Ms. Henry's comprehensive understanding of the instrument, its literature, and its required practice methods provides a path to a successful future for the student.

I began studying with Julianne Henry in the fall of 2014.  At the time, I was a junior at the Fine Arts Center of Greenville, studying chamber winds as well as music theory.  While I had been playing for six years at the start of my study with Ms. Henry, it was my first time studying privately.  Ms. Henry knew right away what errors I was making in my playing and practice routine, and was quick to provide solutions to addressing these issues.  After a period of time of focusing on fundamentals such as tone and embouchure, we as a team began selecting pieces for my college auditions.  Together we selected two contrasting pieces, and began to dive deep into the musical meanings of the selections.  After a period of about four months, I began the journey of three college auditions.  Through the assistance of Ms. Henry, not only was I accepted at all three institutions, but I was awarded over $35,000 in music scholarships.  After the conclusion of my college auditions, we returned to working on not only fundamentals, but also selections I was working on in my classroom setting; something most private teachers might shy away from, forcing the classroom teacher to take time from his busy schedule to help the student.  Ms. Henry is never afraid to let you know when she thinks you might be making an error in your playing, practicing, or performing methods, but manages to address the issue with grace and kindness, ultimately allowing the student to prosper and grow while fixing a problem in a delicate field of music.  Ms. Henry allowed me to grow as a musician, while gaining knowledge of not only the flute, but its literature and history.  Without the assistance of Julianne Henry, I would not be able to take on the tasks as a musician that I am able to take on today.

~Ryan McKeel, Wingate University, 2016
Hannah really enjoyed her first lesson with you and has practiced everyday since. I was impressed with your patience and the very understandable way that you explained everything to Hannah. You both seem to fit well. I am excited to see what is in store for her and her flute! ~ Patricia K., parent
Taylor really enjoys her lessons, and for the first time, gets upset if she doesn't practice . . .thank you for everything you're doing for her and bringing her self confidence up!  Best decision we made on having you teach her!  So thank YOU! ~ Melissa L., parent
Emma has been so excited. . .she said she is doing better on her scales and it is all making much more sense.  Thank you for all of the hard work that you put into the lessons.  She really enjoys coming each week. ~ Shannon K., parent
Andrew is thrilled with his lessons!  ~ Renee J., parent
My husband and I appreciate all that you have done for Kimberly.  As a teacher, you are the best!  Even her band director recommends you as the best teacher at flute. ~Mary Ann M., parent​
Thank you for being the best flute teacher ever! ~Emily B., student
I'm so thankful that God gave me you as a teacher. ~Kimberly M., student
You are the one and only best flute teacher in the world! ~Blaire, 9, student
You have become so much more to Krista than her flute teacher.  You are an important part of her life, and we are grateful for your influence. ~Kim R., parent
Without you, Taylor would have missed out on so much in music! ~Michelle H., parent